Ok, we thought we were maybe getting tired of the full-size Lego car trend that’s now in full swing.Turns out, we’re not. Because here’s the latest, and we’re ecstatic to see it. This time it’s Lego Type R. A brick-built Honda Civic Type R.

So far there have been life-size Lego recreations of the Ford Explorer, Porsche 911, Ferrari Formula 1 cars, Chevrolet’s Silverado, Bugatti Chiron, McLaren 720S, and even a Volvo XC90. And they’ve all required painstaking effort and more tiny bricks than anyone should know what to do with.

The latest comes from Honda of Australia. The build team, led by Lego Certified Professional Ryan McNaught, used more than 320,000 bricks in the build. A process that took more than 1,300 hours for a team of nine.

“We’ve loved the challenge of this project. The car is shaped with a considerable amount of curved lines, making it a tough but interesting build. From the working lights and indicators to intricate Lego Honda logos, the detail on the model has been a fun one for us to work on”, said McNaught. 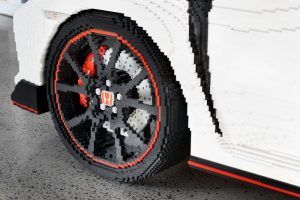 Under the bricks is a steel frame, and everything is glued together. Though all of the bricks are from the standard Lego catalogue. Use the accompanying iPad and you can turn on the headlights, DRLs, fogs, and the rest of the exterior lights.

The team said that the hardest parts of the build were the windshield wipers – because they’re so fragile – and the rear spoiler. Because the Type R has a pretty massive wing spoiler.

The Civic was built for an upcoming TV show. Lego Masters will air on Australia’s Channel 9 and has eight pairs of “Lego fanatics” in an all-out building competition. McNaught will be one of the judges of the show.

Honda Australia Director, Stephen Collins said, “Honda is a company that is all about creativity and innovation so it’s great to support a family show that mirrors these ideals so well. Through Lego Masters we’ll see some of the dreams of the contestants, and also fans, come to life – we’re proud to be helping drive that.”

The Lego Civic Type R will make appearances across down under over the next few months. And it has us looking to see if there are any Australian channels in the 1,300-odd offerings on our TV box.